Last week, my family and I drove up to North Carolina. We were meeting my dad’s side of the family at a lake house in the Appalachian Mountains for a get-together-vacation. The scenery was stunning! Even though I’ve grown up living in a mountainous area, these mountains were far grander! The size and magnitude of it made me marvel at God’s creation. And to think, that he spoke something of such vastness into being!

“And God said, ‘Let the waters under the heavens be gathered together into one place, and let the dry land appear.’ And it was so.” Genesis 1:9

As we drove up the narrow, dirt road of the Appalachian Mountains, my writer mind was bouncing off the wall with ideas. If I could have, I would have stopped the car and spent hours taking pictures! Inspiration was everywhere.

When we finally arrived at the lake house – which was beautiful – I had a bit of a mini-crisis. Wi-Fi was not abounding. And given the fact that I’m a bit…attached to my internet connections, it was definitely not something I was particularly happy with. It ended up being a good thing though, since I actually wrote in my diary and looked at some magazines I had been meaning to look at, but had never taken the time for.

I also did a few “firsts” on this trip. I tried kayaking for the first time, and actually liked it! I even went by myself for a bit (this is coming from a non-risk-taking/adventurous person, so you must understand the significance of this lol :p). I also tried paddle-boarding, though I didn’t go as far out on the lake with that as I did with the kayak. 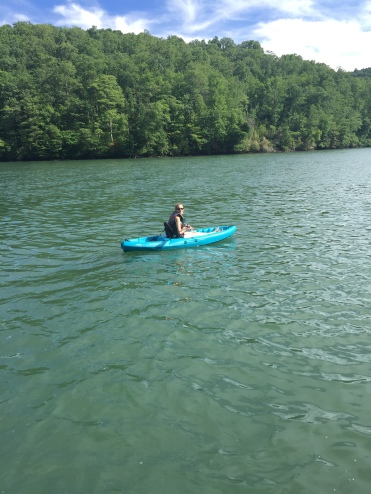 On one of our days there, my mom, grandmother, and I drove into the local town of Cashiers. They had beautiful pieces of furniture, and several antique stores. We went to one store, called Gracewear. They had really cute t-shirts, cups, and jewelry in the Gracewear collection. This was actually the original Gracewear store and as such, we were able to meet the owners. It was really neat and we talked about Jesus together for a while.

We had a great time at the lake, and I thought it would be a great spot to come back to for future vacations!