Petticoats, undergarments, jeans, and tennis shoes–fashion has certainly changed throughout the years, and I thought I would highlight a specific decade of fashion: the 1940’s.

World War II had a major effect on how fashion evolved during this time period. Because of rationing, the dress length for women was brought up to right below the knee. Shoulder pads became a huge trend, finding a place in almost every dress, jacket, and blouse that was worn. This gave off a boxy effect and a more militant look than previous styles. Different necklines that existed during this period included the sweetheart, wrap, keyhole, and V among others. All were exceedingly modest. 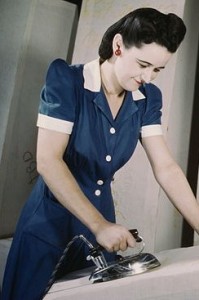 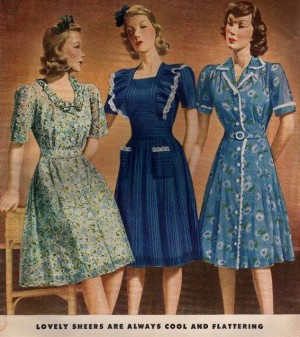 Interestingly, an effect of fabric shortage was the victory or utility suit. Women found this option appealing since it allowed them to mix and match different clothing pieces – allowing more outfits for less fabric. Unlike our modern pencil skirt, the 1940’s one was A-line, slowly flaring out. Women would pair solid or colored blouses – almost always buttoned down – with the skirt. The padded, wide shouldered jacket would be the finishing touch, following the trend of the time. 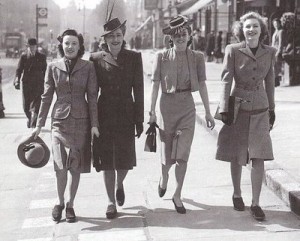 Another effect of the war dabbled into the different fabrics people were able to use. Primary and neutral colors in solid prints were usually turned into clothing items. As the war progressed, however, people began buying and sewing with some prints such as florals, polka-dots, and plaid. Rayon was a new synthetic invention that was quite popular with home sewers. Cotton and wool were also used.

Restrictions in fashion did not pertain only to women, however. The lack of fabric affected male styles and clothing too. Men were not allowed to have flaps, cuffed pants, and trousers could be no more than nineteen inches around. Despite this, the cuffed style was so popular that people found a way around this obstacle. By buying longer pants, people could cuff their own trousers at home.

Casual style was a huge by-product of the war time restrictions. Most men were no longer able to abide by the strict dress code, and therefore more casual items were introduced. Knit shirts came into play, oftentimes having Norwegian designs. The neckline was usually rounded and high, although the optional V neck allowed some diversity.

Despite this, suits were still something men wore every day. A classic suit from the 1940’s would include the wide-chalked pattern. Pants were wide around the ankle and often times high-waisted. 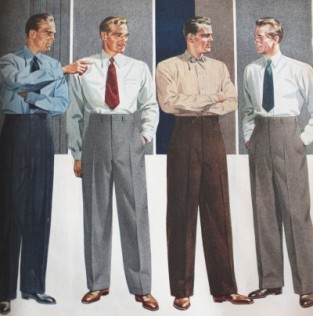 The trench coat was another classic that closely resembled the overcoat. It had a boxy appearance and fell to the knee. Another icon from 1940’s fashion was the Gabardine jacket, made from a cotton and rayon mix. Plain in style, it had five buttons down the front which would be switched for the zipper in later years. This jacket, as opposed to the trench coat, halted at the waist. 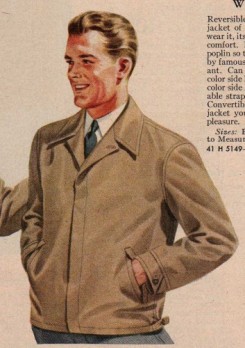 I hope y’all have enjoyed learning about fashion from another decade. I know I certainly have!