“It is impossible to rightly govern a nation without God and the Bible,” ~ George Washington

Many people today are declaring that America was never a Christian nation, that it was not founded on Judeo-Christian values. And if people’s eyes are not opened to the truth, then this falsehood could become even more rooted in the minds of Americans.

John Quincy Adams said, “I have myself, for many years, made it a practice to read through the Bible once every year,” and, “My custom is, to read four or five chapters every morning, immediately after rising from my bed. It employs about an hour of my time, and seems to me the most suitable manner of beginning the day” (Letters of John Quincy Adams to His Son on the Bible and Its Teachings).

Even Benjamin Franklin, who many consider to be an unbeliever, said as recorded by James Madison, “We should remember the character which the Scripture requires in Rulers, that they should be men hating covetousness.”

On November 26, 1789, during his Proclamation for day of Thanksgiving, George Washington said, “It is the Duty of all Nations to acknowledge the Providence of Almighty God, to obey his will, to be grateful for his Benefits, and humbly to implore his Protection and Favor.”

In fact, when the war with England cut off their supply of English Bibles, Congress in September of 1777, determined to import 20,000 Bibles from Holland, Scotland, or other countries because, “the use of the Bible is so universal and its importance so great” (pg. 60, Building Godly Nations).

George Washington Carver, born into slavery just before the end of the Civil War, discovered over three hundred uses for the peanut. The story of how this came about is remarkable.

“I asked the Great Creator what the universe was made for.

‘Ask for something more in keeping with that little mind of yours,’ He replied.

‘What was man made for?’

‘Little man, you still want to know too much. Cut down the extent of your request and improve the intent.’

Then I told the Creator I wanted to know all about the peanut. He replied that my mind was too small to know all about the peanut, but He said He would give me a handful of peanuts. And God said, ‘Behold, I have given you every herb bearing seed, which is upon the face of the earth…to you it shall be for meat…I have given every green herb for meat: and it was so.’ I carried the peanuts into my laboratory and the Creator told me to take them apart and resolve them into their elements. With such knowledge as I had of chemistry and physics I set to work to take them apart. I separated the water, the fats, the oils, the gums, the resins, sugars, starches, pectoses, pentosans, amino acids. There! I had the parts of the peanuts all spread out before me.”

“I looked at Him and He looked at me. ‘Now, you know what the peanut is.’

‘Why did you make the peanut?’

The Creator said, ‘I have given you three laws; namely, compatibility, temperature, and pressure. All you have to do is take these constituents and put them together, observing these laws, and I will show you why I made the peanut.’

I therefore went on to try different combinations of the parts under different conditions of temperature and pressure, and the result was what you see.” 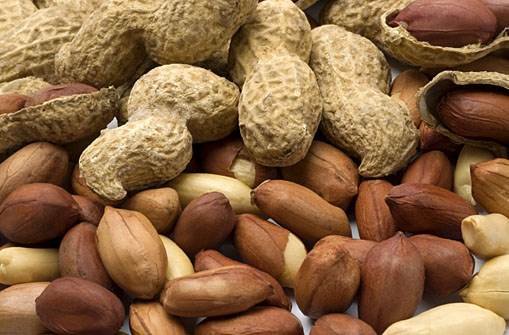 In other words, God had revealed to him the means by which to use the peanut for and in metal polisher, plastics, ink, shampoo, shaving cream, a dozen beverages, and synthetic rubber among many more.

When he testified before a committee of Congress, in 1921, the Chairman inquired:

“‘Dr. Carver, how did you learn all of these things?’

Carver answered: ‘From an old book.’

‘What book?’ asked the Senator.

The Senator inquired, ‘Does the Bible tell about peanuts?’

‘No Sir,’ Dr. Carver replied, ‘But it tells about the God who made the peanut. I asked Him to show me what to do with the peanut, and he did.'”

Another important American that believed in Christian values was Noah Webster. Father of American Education, in 1836, he wrote, “In my view, the Christian religion is the most important and one of the first things in which all children, under a free government, ought to be instructed…No truth is more evident to my mind than that the Christian religion must be the basis of any government intended to secure the rights and privileges of a free people.”

“Dr. Donald Lutz conducted an exhaustive ten-year research of about 15,000 political documents of the Founders’ Era (1760-1805), and recorded every reference our founders made to other sources. This list of 3154 citations reveals those writings and men that most shaped the political ideas of our founders. By far, the most quoted source of their political ideas was the Bible, 34% of citations. The next most quoted sources were from men who largely derived their ideas from the Bible (Montesquier, 8.3%, Blackstone, 7.9%, and Locke, 2.9%). In fact 80% or more of all the citations were from the Bible or Biblical thinkers” (pg. 74, Building Godly Nations).

If that isn’t enough for you, then why Harvard College was founded should be. In 1636, New England Puritans founded Harvard College for the purpose of training ministers for the Gospel. “They thought the greatest curse that could come upon the land would be an impotent, ignorant clergy” (pg. 67, Building Godly Nations).

The original rules at Yale College, also show the importance placed on the Bible. “All scholars shall live religious, godly, and blameless lives according to the rules of God’s Word, diligently reading the Holy Scriptures, the fountain of light and truth; and constantly attend upon all the duties of religion, both in public and secret” (Annuals of America, Volume 1).

In all, out of the first 108 colleges founded in America, only two were not based on the Christian faith. 106 were.

I could go on and on about other people, events, and facts that support the claim that America was founded on a Judeo-Christian heritage, but, of course, that would be a much longer post. I hope this has opened your eyes to the truth of our country’s history. And as we celebrate the fourth of July, let us remember the brave men and women who came before us.

Note: All of the information (unless stated otherwise) came from Building Godly Nations by Stephen. H. McDowell. Thank you for doing all of the hard research that allows people like myself to discover it!