Over spring break, my dad and I went to see Black Panther. It was my second time seeing it, and his first. With the upcoming Infinity War, I thought I would hurry on up and get in my review of this movie first! 🙂

Black Panther takes place after Civil War, with T’Challa, played by Chadwick Boseman, returning to Wakanda, after the death of his father, to take his place as king. Wakanda is a nation in Africa, however, its actual country is concealed from the world. Most people believe that it is a poor nation, that happens to have a small amount of the strongest metal on earth – vibranium.

The truth, though, is that Wakanda is one of the most technologically advanced countries in the world and is far from being helpless.

During the course of the movie, T’Challa’s reign gets challenged by a foe that is surprisingly connected to Wakanda, and he is forced into a difficult position of what to do when your entire worldview and belief about your country and family is rocked on its axis.

His family is there to support him each step of the way however, with his sister, Shuri, played by Letitia Wright (I did a post on her here), and his mother, Queen Romanda, played by Angela Bassett. With their help, T’Challa strives to do the right thing, while having the weight of Wakanda on his shoulders in the process.

Black Panther is an amazing movie that combines action, humor, and culture into a two hour and fourteen minute film, and if you haven’t seen it, you definitely need to.

Alright, as per usual, there’s the spoiler-free version 😉

ANYTHING BELOW WILL HAVE SPOILERS.

With that out of the way, full-speed ahead into spoiler territory!

There’s so much to unpack in this movie, that I’m just going to jump right in and ask that y’all bear with me. 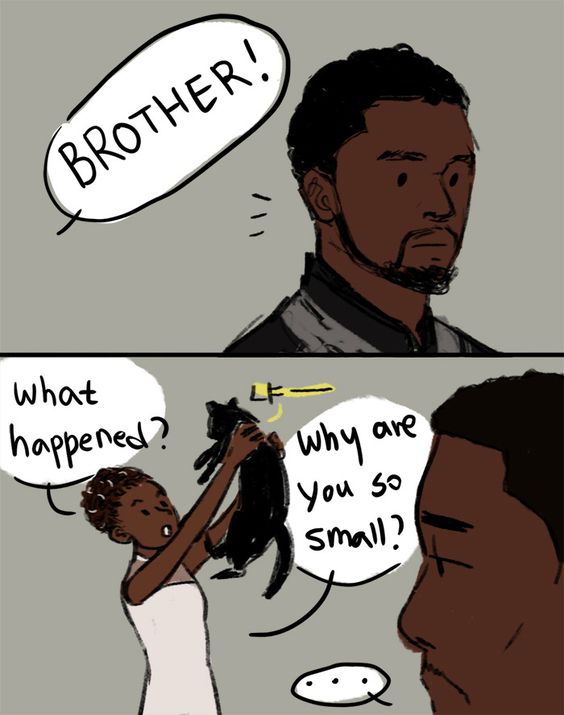 First of all, can I just say that Marvel does sibling relationships fabulously??? I love Shuri and T’Challa’s relationship. There’s Shuri, who at sixteen, gets a huge kick out of the fact that her brother is being made king. This is never more apparent than at the ceremony, when she asks, “can we get on with it already?” and mentions that the corset is really killing her.

And T’Challa, who bless his soul, finds himself continually roasted by his little sis. I saw something on Tumblr that I just have to restate here – “being a good older brother: reassuring your sister after she unknowingly ran over someone in the street.” xD

One of my favorite scenes in the movie, is at the very end, when the antagonist of the movie, Erik Killmonger (also I LOVE NAMES WITH PUNS, and like the fact that his last name has the world “kill” in it is hilariously ironic considering his reputation), is about to attack Shuri. At this point, Shuri has used all the firepower in her weapons and stumbles to the ground.

In the distance, T’Challa is taking some serious hits from basically the entire tribe under W’Kabi. You can see him getting tired and becoming weary, when all of a sudden, in his line of sight, he catches view of Erik about to attack Shuri.

Pretty sure you can guess what happens. T’Challa ain’t having NONE of that dude hurting his little sister, and instantly, you can physically see him becoming reinvigorated as he races toward them and knocks Erik away from Shuri.

It reminded me so much of in Star Wars, when Vader is taunting Luke. And Luke is doing an awesome job of keeping his cool, until Vader mentions Leia…starts threatening her. Farewell calm persona, hello protective anger.

Lesson of the day, ladies and gentlemen, don’t mess with someone’s siblings. Just. Don’t. Seriously, you will live a much longer life if you listen to this piece of advice xD

On the mention of Star Wars, I can’t help but also notice that there were some other elements that echoed the space series. For one, did anyone else get Padme Amidala vibes from Queen Romanda’s outfit, when she greets T’Challa upon him arriving home? Cause I totally did. The more obvious touch, I think, were Shuri’s buns – reminiscing of Princess Leia.

I thought Black Panther also did a great job of showcasing the culture of Africa. You can tell they really put a lot of thought and effort into the research for the different tribes and such.

Additionally, they did a great job of showing so many different type of women. There’s not just one stereotype. You have Nakia, who has a compassionate spirit, desire to help others, and is a spy for Wakanda. You have Okoye, who has strong leadership qualities, not very emotional, and is the general of the Dora Milaje, an elite female special force that protects the king. You have Queen Romanda, who is wise, more traditionally feminine (if that makes sense), and an advisor to T’Challa. You have Shuri, a light-hearted teen, who has one of the most brilliant minds in the world.

In terms of the villain, I did not see Erik Killmonger being related to T’Challa coming at all! So, I think they set that up very well to be a surprise. I liked how they tied in the storyline of helping others with the villain, without making what Erik did right. 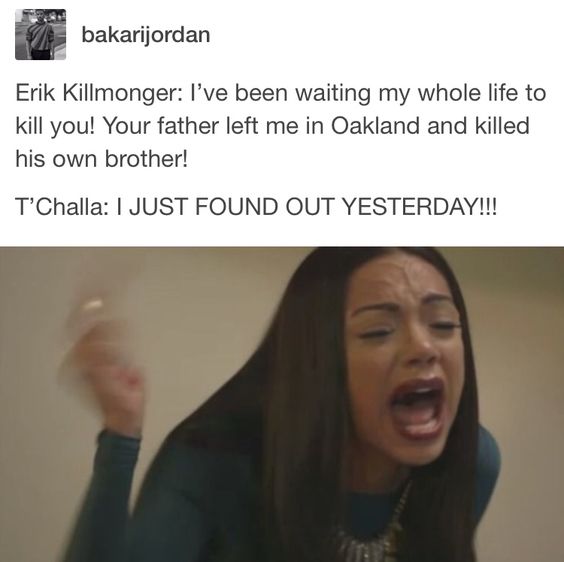 And Everett Ross was such a great addition. I felt like he was pretty much everyone in the audience if we were in the movie: “Hey, don’t know what I’m doing, or what’s going on, but I’ll totally help with anything.”

Personally, Shuri was one of my favorite characters in the movie. I loved her humor and the light-heartedness she brought to the film, which was much needed with some of the seriousness.

If you’ve seen Black Panther, what did you think about it? Favorite scenes, characters? If you haven’t, I encourage you to go watch it! And definitely see it before Infinity War!