Y’all. Avengers: Infinity War is out.

Is anyone else freaking out?

Cause, if you can’t tell, I totally am.

Excuse the rambling, let’s get to it, shall we? On the line-up in Infinity War, we have…

Tony Stark played by Robert Downey Jr (otherwise known as the godfather of the MCU as several of his fellow actors – Tom Holland and Mark Ruffalo specifically – have said, started the Marvel Cinematic Universe back in 2008 with Ironman.

In his own words, he is a “genius, billionaire, playboy, philanthropist.” His skillset includes being a brilliant scientist (physics, computer science, chemistry, neuroscience), expert businessman and hacker, as well as being multilingual – though not fluent, and a gifted engineer and robotics technician.

Steve Rogers played by Chris Evans, another founder of the first Avengers team. Because of the serum, he has enhanced mental processing, strength, durability, speed, stamina, agility – greater than a Olympic gold-medalist, reflexes, and senses. He also has a regenerative healing factor.

Other advantages, include being a master martial artist, acrobat, tactician, and strategist, not to mention, that he is an expert marksman, military operator, pilot, and is multilingual – English and French.

Natasha Romanoff, played by Scarlett Johansson, was trained by the KGB and Red Room, before earning the title of Black Widow. She is regarded as one of the most lethal assassins in the world.

Her skillset is comprised of being a master spy, martial artist, acrobat, interrogator, as well as being a pilot, multilingual (Latin, Russian, English, German, Chinese, Italian, etc), expert marksman and hacker, and having intellect equal to Captain America.

Bruce Banner, played by Mark Ruffalo most commonly, has the ability to transform into his alter-ego, the Hulk if his heart rate increases too much or he loses control of his emotions. The Hulk has superhuman strength, durability, stamina, speed, and a regenerative healing factor.

In terms of Bruce, he is master scientist (biochemistry, bio-organics, and atomic and radio physics), expert tactician, skilled physician, and is multilingual (fluent in Hindi and English).

Clint Barton, played by Jeremy Renner, was a SHIELD agent until SHIELD’s collapse. He is married to a woman named Laura, and they have three young children – Cooper, Lila, and Nathaniel.

Hawkeye’s skills are being a master marksman, acrobat, martial artist, and assassin. He is also a pilot, expert tactician, and is multilingual (English, Russian, Arabic, Chinese).

Thor Odinson, played by Chris Hemsworth, is not from Earth, instead hailing from Asgard and is now king of Asgard’s people. His Asgardian physiology means that he has superhuman strength, speed, reflexes, agility, durability, stamina, longevity, and a regenerative healing factor.

Additionally, Thor is able to manipulate the weather, electricity, and fly. He is also a master combatant, swordsman, spearman, leader, and pilot.

WOO! And those are only the founding members of the Avengers! I’m so nervous y’all, on who they are going to kill off O_O I would really prefer if they left them all alone…pretty please Marvel – THEY HAVE SUFFERED ENOUGH. Who’s with me?

Alright, alright. I know y’all are wondering about the others! *inhales* Ok. *cracks knuckles* ONTO THE OTHERS!

Wanda Maximoff, played by Elizabeth Olsen, is from Sokovia, and upon volunteering to be experimented on for personal reasons, she gained many abilities, and eventually joined the Avengers.

Vision, played by Paul Bettany, is an android or robot who

has a vibranium body. He is a mixture of Ultron and JARVIS, and is “alive” because of the Mind Gem which is embedded in his forehead.

The robot’s skills include density manipulation, superhuman durability and strength, intangibility, and flight. Vision can also make energy blasts, create synthetic skin constructs aka whatever outfit he feels like wearing xD, and as an android, his “brain” is basically a computer. Stephen Strange, played by Benedict Cumberbatch, was a renowned neurosurgeon until a tragic accident ruined his hands. He has a photographic memory, which is why he was able to earn a MD and PhD at the same time.

Through his journey, Dr. Strange was able to learn the mystic arts. In this way, he is able to be a master sorcerer – Eldritch magic, levitation – using the Cloak of Levitation, teleportation, interdimensional travel – using the Sling Ring; astral projection, time manipulation – using the Eye of Agamotto, and transmutation. He also has an eidetic memory, and is a master tactician, skilled martial artist, and multilingual.

Loki Laufeyson, played by Tom Hiddleston, is a Frost Giant, though adopted by Odin and Frigga as a baby. His Frost Giant heritage means that he has superhuman strength, speed, agility, durability, stamina, longevity, cold immunity, and regenerative healing factor.

Further, he is a master sorcerer in illusion manipulation, hypnosis, presence concealment, conjuring, and telekinesis. He is a master manipulator, tactician, expert combatant, pilot, and arcane lore – immense knowledge and skill in mystical objects.

It will certainly be interesting to see how all these super-magical people interact together! I hope we’ll get a scene of these four fighting side by side!

Peter Parker, played by Tom Holland, otherwise known as Spider-Man, is a high school student at Midtown School of Science and Technology. Since his parents died when he was a child, he lives with his Aunt May.

In terms of skillsets, his spider physiology means that he has superhuman strength, speed, durability, agility, equilibrium. As well as, enhanced senses – vision, spider-sense, wall-crawling, and regenerative healing factor. Peter has gifted intelligence and is a tactician, investigator, trilingual (English, Spanish, Italian), acrobat, marksman, and combatant. 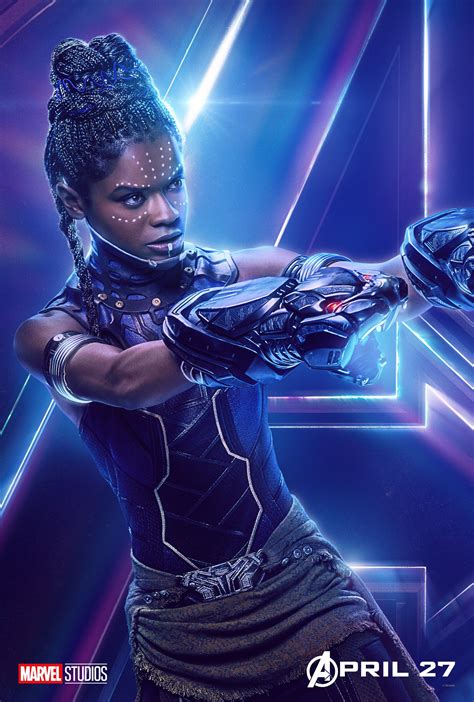 Shuri, played by Letitia Wright, is the princess of Wakanda, and is T’Challa’s younger sister. She is the leader of the Wakandan Design Group, and has developed much of her country’s technology. Additionally, she has a genius-level intellect on par with people like Stark, Banner, Helen Cho, Hank Pym, etc…

Her skillsets also include being a master engineer and multilingual (English and Xhosa).

Groot, played by Vin Diesel, is a sentient, tree-like being, who is the son of the Groot in the first Guardians of the Galaxy. He has superhuman strength, durability, enhanced speed, regenerative healing factor, longevity, and rebirth. Further, he is able to generate light, flowers, twigs, vines, and can use these to create a shield-like structure. Groot is also elastic.

I seriously need interactions between these three!!!

Sam Wilson, played by Anthony Mackie, was introduced in Captain America: The Winter Soldier. He is an ex-military officer, good friend of Steve, and uses the codename “The Falcon.” His skillsets include being an expert marksman, tactician, aviator, and being proficient in different weapons. He also has hand-to-hand combat skills, and is a great pilot.

James Rhodes, played by Don Cheadie, known as “Rhodney” is a U.S. military officer and jet pilot in the Air Force. Best friends with Tony, Rhodney was one of the first in the Marvel universe as he appeared in Ironman. His codename is “War Machine” and he is an expert pilot, tactician, martial artist, and marksman. 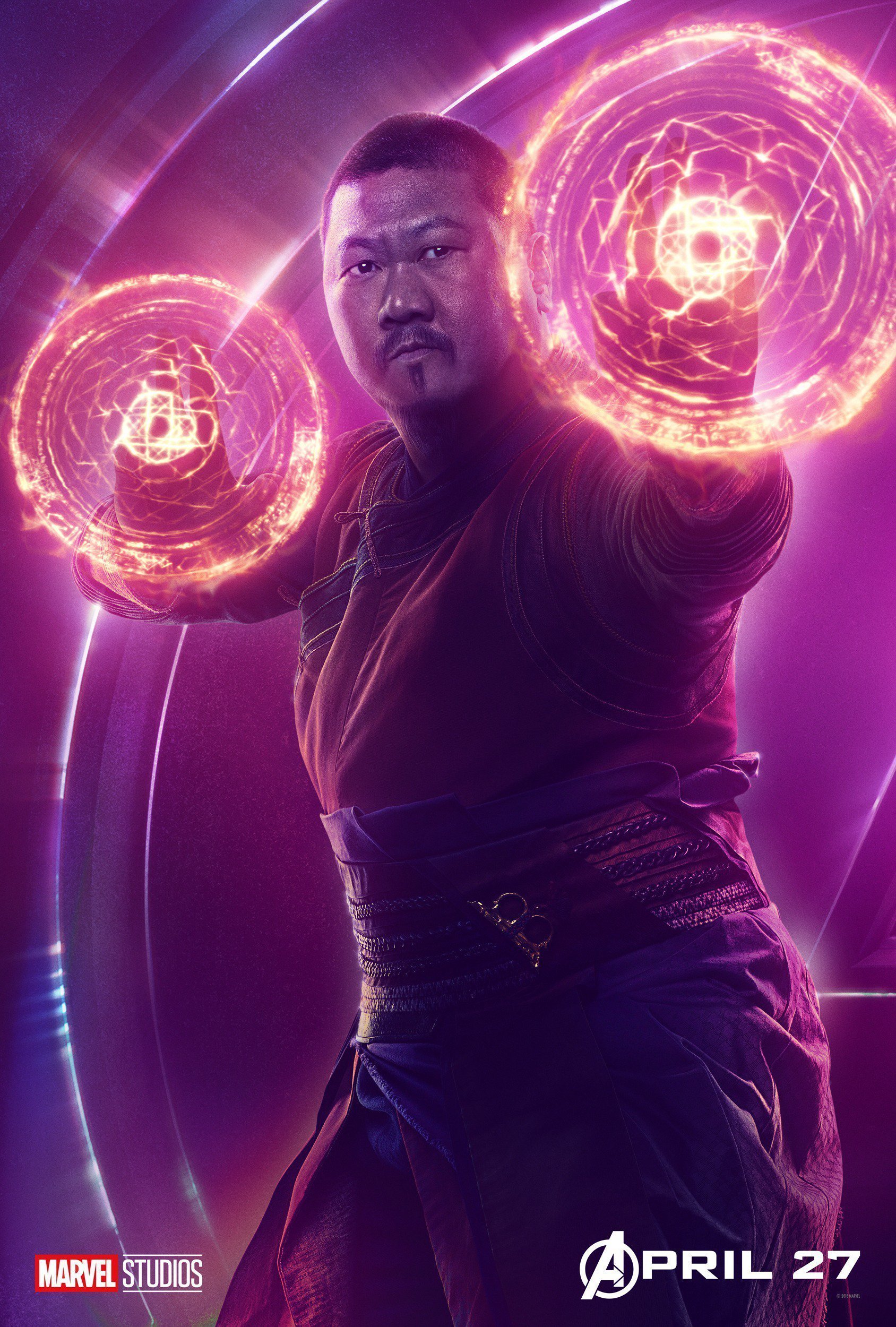 Wong, played by Benedict Wong, was introduced in Doctor Strange, as he helped Strange go on his journey of learning about the mystic arts and rediscover himself. He is a master martial artist, sorcerer, and can create, shape, and manipulate Eldritch magic.

Okoye, played by Danai Gurira, is the general of the Dora Milaje and in charge of Wakanda’s armed forces and intel. She is an expert martial artist and marksman, as well as, being multilingual (Xhosa, English, Korean).

Bucky Barnes, played by Sebastian Stan, was introduced in Captain America: The First Avenger as the best friend of Steve. Later, he is manipulated by HYDRA and becomes “The Winter Soldier,” although, at the end of Black Panther, some children call him “White Wolf.” Because of the experimentation done on him, he has artificially enhanced physiology – enhanced strength, speed, durability, stamina, agility, reflexes, and regenerative healing factor. His biotic arm gives him superhuman strength. Among his skillsets include being a master martial artist, marksman, assassin, acrobat, and mastery over knives. He is also a master pilot and multilingual (English, Russian, Romanian, etc).

Gamora, played by Zoe Saldana, is the adopted daughter of Thanos. She has Zehoberei physiology and bionic enhancements. This gives her superhuman strength, agility, stamina, and a regenerative healing factor as well as enhanced durability and vision.

She is a master assassin, combatant, and of swords, also, an expert marksman and pilot.

Nebula, played by Karen Gilan, is another of Thanos’s adopted daughters. Her Luphomoid physiology gives her superhuman strength, durability, and agility. She also has cybernetic enhancements and regenerative healing factor.

Her skillsets include being a master assassin, combatant, pilot, and expert marksman.

Drax, played by Dave Bautista, is known as “Drax the Destroyer.” He has superhuman strength, durability, agility, and a regenerative healing factor. Additionally, he is a master of knives and an expert combatant.

Rocket, played by Bradley Cooper, is a genetically enhanced fur animal. He has enhanced strength, durability, agility, and acute senses, as well as, genius-level intellect. Further, other skillsets include being a master pilot, engineer, marksman, tactician, and an expert combatant.

Mantis, played by Pom Klementief, was raised by Celestial Ego. She has enhanced durability, and is an empathetic, meaning that she can sense others emotions, manipulate them, and induce sleep.

T’Challa (I know technically he was in Civil War, but I feel like Infinity War will be the first time he’s really fighting with the Avengers), played by Chadwick Boseman, is the king of Wakanda. With the heart-shaped herb, T’Challa is able to have enhanced strength, speed, stamina, durability, agility, reflexes, and regenerative healing factor.

He has genius-level intellect, and is a skilled pilot. Also, his skillsets include being a master martial artist, acrobat, tactician, and is multilingual (Xhosa, English).

Scott Lang (sort of the same thing with T’Challa, on why I’m putting him here), played by Paul Rudd, is known as Antman – using the technology of Hank Pym. With his suit, he has size manipulation, superhuman strength and durability, and insect manipulation.

On his own, he is an expert thief, engineer, acrobat, tactician, and martial artist. He also has gifted intelligence.

Carol Denvers, played by Brie Larson, is known as “Captain Marvel.” In 2019, her debut movie, Captain Marvel will be coming out. Until then, here are her skillsets based on the comics. She has superhuman strength, stamina, durability, agility, flexes, regenerative healing factor, and has a contaminant immunity.

Further, she can fly both in and out of space, flash precognition/cosmic awareness, photonic blasts, energy absorption, and has minor molecular control. She is a experienced spy, multilingual (English, Russian, Kree, Shi’ar), master pilot, combatant, and a journalist.

Wow. So many amazing superheroes – and those are only the main ones! Tomorrow, I will be seeing Infinity War in theaters. Cue excitement and nerves. I have mixed feelings, because I am super pumped to see it, butttttttt I also know that they will be killingoffsomeofmyfavoritecharacters. WHICH, I am not ok with.

Pretty please, let’s all not give any spoilers away – ESPECIALLY on a movie of this size and magnitude and an ending that will effect the rest of the MCU.

When are y’all going to see Infinity War? Are you excited? Anxious?